Teus Nobel released his first solo‐album FLOW in 2012 on Flyin’ High Records. It brought him many raving reviews and the title ‘Radio 6 Soul & Jazz Talent’ (on Dutch Radio 6). His second album LEGACY moved away from the fusion jazz of FLOW a little and delved into more classic and profound territories, honouring trumpet giants such as Miles Davis, Christian Scott and Eric Vloeimans.

Nobel’s third album on Flyin’ High Records, SOCIAL MUSIC, is an expirimental endeavor in cooperation with producer/composer Merlijn Verboom. The sound is more electronic than before, darker, like a film noir soundtrack. Lots of effects and expressive playing by the other bandmembers make this a refreshing listen.

During his study Teus already toured a lot with the Rotterdam Ska Jazz Foundation. Later on he added acts such as Caro Emerald, Kyteman, Monsieur Dubois, Wicked Jazz Sounds and soul singer Frank McComb (USA) to that list. He is also lead trumpet player in the Dutch Royal Airforce Orchestra since 2010. 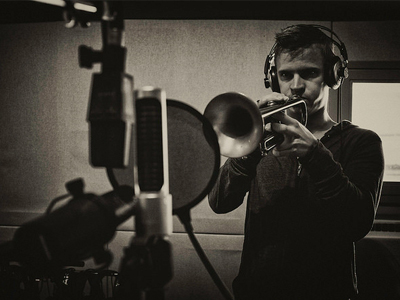