Scallymatic Orchestra is an 8-strong jazz group, founded in 2000. They play a fresh mix of groove jazz and funky fusion. Their sound sometimes hints at the 70s, the decade in which the band members grew up, but it is at the same time very modern. With catchy grooves, cool themes, enough room for improvisation and a good dose of suspense, the band is able to convince both a club crowd as the discerning listener. Scallymatic Orchestra plays original composition by guitarist/bandleader Mathijs Duringhof.

This is their first official release. An accelerating, soothin’n groovin’ jazz-tune that will please musical ears over and over again.

Buruman is a new name to watch out for. Although this is his first release, it is not his first accomplishment in the field. He’s been working with Mocky and the Zephon’s Mom label, and he was also the man behind the mixing desk of Rednose Distrikt clubhit ‘Make a Move’ featuring Alma Horton. Watch out for this little guy on Flyin’ High…

MFPCollective started as a DJ collectieve at the end of the 20th century, and founded Flyin’ High Records. This is their first release as remixers. More will follow soon (for Cosmic Sounds a.o.).

Rednose Distrikt hardly needs introduction, as their releases on Humhum, Zephons Mom and Rushhour have been praised and played by the likes of Jazzanova, Michael Rutten, Kyoto Jazz Massive, DJ Spinna, Domu and others. This remix of Scallymatic Orchestra is in their typical jazz not jazz hiphop style, conceived after listening to the original for ten times in a row. Lo-fi beats for the future. 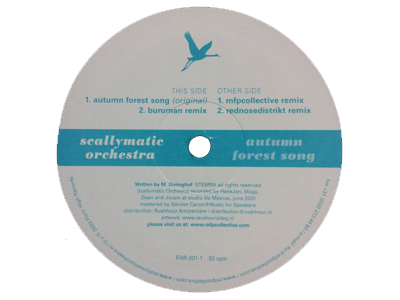